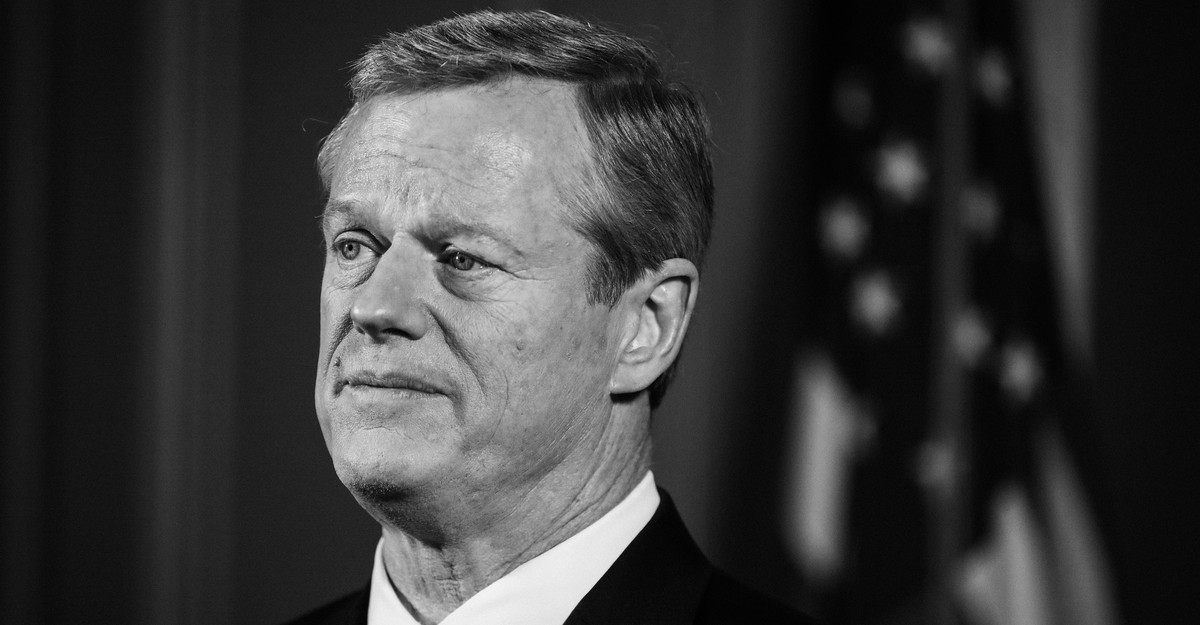 At least once a week during the past two years, a flock of protesters could be found outside the seaside home of the Republican governor of Massachusetts, airing their grievances about the man they call “Char-lie Baker.” (It rhymes with pie—get it?) Two years of “Char-lie Baker” would be a lot for any person to take, especially when the clamor is coming from members of your own party.

The gatherings began in April 2020, when more than a dozen anti-lockdown demonstrators drove, horns blaring and Trump flags hoisted high, back and forth past the governor’s white Victorian. For months after, picketers convened on the grassy median on Baker’s street in Swampscott, wielding life-size cutouts of Donald Trump or, sometimes, Confederate flags. The organizer of the weekly visits accused Baker of being “in bed” with “the Chinese Communist Party and the Muslim Brotherhood.” Many of the protests attracted a police detail. On some occasions, officers erected barricades. The nearby elementary school canceled classes after Election Day 2020, citing an “abundance of caution.”

It follows that when Baker announced in December 2021 that he would not seek a third term, his right-wing critics declared victory. “What we saw was Charlie Baker looking at his chances and realizing he couldn’t get through a Republican primary,” Wendy Wakeman, a Massachusetts-based GOP strategist, told me. The governor’s allies told a different story. Baker didn’t fear losing a primary, they insisted: He’d already outraised the opponent Trump had endorsed against him seven to one.

That one of the most popular governors in the country refuses to seek reelection is nevertheless a dark omen for the future of America’s two-party system. Political competition provides a crucial check against corruption and stagnation, but most states are already short on it. Single-party rule at the state level is close to a modern high: All but 12 states are under unified control of a single party, meaning that either Democrats or Republicans control both the governor’s mansion and the legislature. Baker’s departure practically guarantees that Massachusetts will join those ranks. The triumph of Baker’s right-wing critics is a precedent and a proof of concept. If a vocal base can, without a primary, deter popular moderates from running in races they could have won, competitive state-level elections are about to get even rarer. That’s great news for the party in power, but voters stand to lose.

Baker had plenty of reasons to sit out a third run, aides close to him told me. His top consideration was his family, who weren’t too keen on another campaign. His ambitions to revitalize Boston’s dilapidated subway system and reform public education had been scuttled by COVID-19, with little chance of resurrection as the pandemic wore on. But running against Trump’s pick would’ve meant four more years of taunts from the GOP base. Baker, 6 foot 6 and charismatic, could have spent his time in office doling out prescriptions to his ailing party on cable news. Instead, he shied away from greenrooms and only occasionally registered his distaste for the former president, whom he decried as “outrageous, disgraceful, and a divider” during a 2018 debate. Baker never said publicly whether the vitriol from his conservative critics bothered him. The closest he came was in December, when he told reporters he looked forward to skipping “the discourse—and that’s probably an insult to the word discourse—that comes with political campaigning.”

The mainstays of the Republican Party came to bury Baker, not to praise him. Jim Lyons, a Trump devotee who defeated a Baker loyalist to become the state party chair in 2019, said he looked forward to “turning a new page.” The local right-wing radio personality Howie Carr heralded Baker’s departure as “another scalp of an anti-Trump poseur.” Then-President Trump, who rarely misses a chance to swipe at any Republican who refuses to kiss his ring, took credit. “He shouldn’t even be considered a Republican,” he said in a statement. “We wish him well!”

Baker’s wing of the Massachusetts Republicans, whose brand of social liberalism and fiscal conservatism expired within the national party long ago, now goes the way of Cape Cod’s eroding coastline. His exit could be explained by voting patterns alone: Republicans account for less than 10 percent of all registered voters in Massachusetts, fewer than in 1858, the year the party was founded. “I don’t think anyone thought they were going to knock off Baker,” Shawn Dooley, a GOP state legislator who unsuccessfully challenged Lyons for the chairmanship last year, told me. Dooley, a Trump voter but a pragmatist all the same, was dumbfounded by the outcome of Baker critics’ efforts. “​​Trump got 30 percent of the vote in Massachusetts, and we’re going to double down on that philosophy?” he said. “You don’t have to go to MIT to know that math doesn’t work.”

As one-party rule has become more common at the state level, governorships have been one of the last offices for which voters are still willing to consider candidates from parties other than their own. Those waning reserves of open-mindedness won’t matter much, though, if a party’s base can prod candidates with broad appeal out of the race before they face voters. Even powerful, popular governors are no longer immune to being forced into retirement by their parties’ unforgiving bases, Rob Gray, a Massachusetts-based GOP consultant, told me. “At the national level, Trump has brought new voters and energy to the party,” he said. That’s been a boon to red-state Republicans, who have shored up control of governors’ mansions and statehouses on the backs of Trump voters. But in Massachusetts, “Trump’s had a cannibalizing effect on the party,” Gray explained. “He’s further crippled Republicans in states where they’re already struggling.”

The next governor of Massachusetts, who will almost certainly be a Democrat, will govern alongside a Democratic majority, if not supermajority, in the state legislature. When that happens, Massachusetts “will become a beacon for what progressive politics can do,” says Tatishe Nteta, a political-science professor at the University of Massachusetts at Amherst. That’s not a bad outcome if it’s what the voters of the commonwealth want, but the fact that Massachusetts has been run by a Republican governor and a Democratic legislature for all but eight of the past 32 years suggests that one-party rule may not be the preference of most Bay State voters.

Unified Democratic government will speed up a lawmaking process slowed by Baker’s vetoes and long-winded negotiations between the executive and legislative branches. But that efficiency comes with costs. Under one-party rule, marginal voters are among the first civic casualties, says Lee Drutman, a senior fellow studying political reform at the New America Foundation. In the absence of a competitive party system, candidates can win without mobilizing low-turnout populations, which “ends up reinforcing inequality in politics,” Drutman told me. Elections end up being decided by political obsessives, rather than swing voters or folks who are focused on their pocketbook. Independent voters retreat, too, because they “feel that they do not have a choice of candidates who represent them,” Jennifer McCoy, a political-science professor at Georgia State University, wrote me in an email. “They may become alienated from the system, withdrawing from politics altogether”—or they “may turn to other means to influence decision-making that could be more disruptive.”

“Other means” has lately held its dress rehearsals for that one-party future at the home of Michelle Wu, Boston’s new progressive mayor. In recent weeks, right-wing protesters have shown up on her doorstep with signs and megaphones to demand an end to the city’s vaccine mandates. In February, Wu filed an ordinance to limit residential picketing. “In a moment of divided national politics, we can’t normalize the harassment and hate spilling over into our communities,” she said in a statement.

Baker’s street in Swampscott, meanwhile, has been restored to its suburban stillness. The weekly demonstrations ended after Baker announced he would step aside.

Justice Thomas Must Resign or Be Impeached 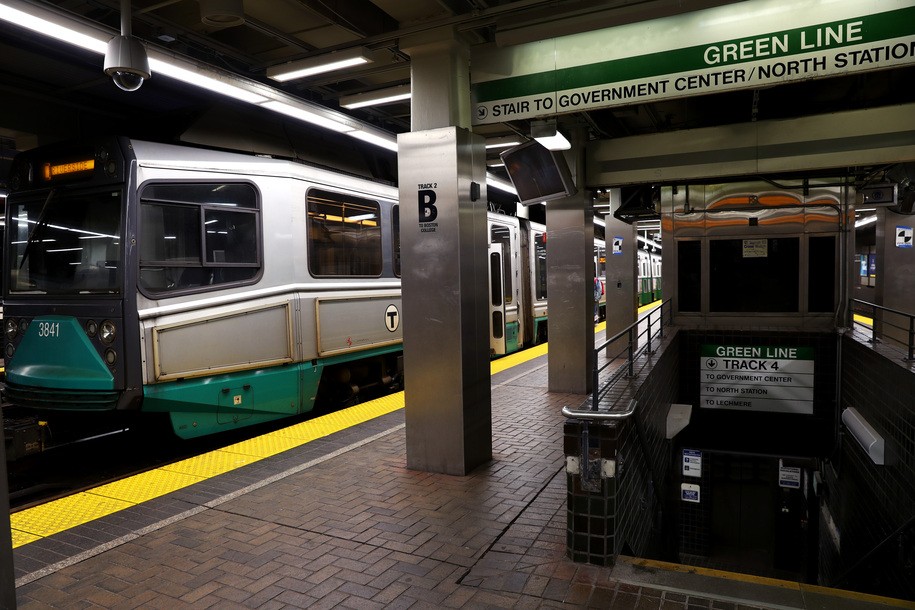 Kurt Wise of the Massachusetts Budget and Policy Center has noted that the Fair Share Amendment would advance racial justice since the top 1% of households are disproportionately white—86% compared with 73% of the state’s households overall. While the new tax would affect 0.8% of white households, it would affect only 0.4% of Black households and 0.2% of Latino households. But the revenue collected would go to education for all kids, and roads and bridges and public transit used by anyone traveling through the state.

As Massachusetts has spent less per student on public higher education, tuition has risen and the burden of paying for college has shifted to individual students and their families, often in the form of student loans—which, as we know, are disproportionately held by Black borrowers. The Fair Share Amendment’s investment in higher education could help the next generation of students avoid some of those loans.

There are more than 600 structurally deficient bridges in Massachusetts. The money from the Fair Share Amendment could go to them, as well as to the state’s struggling public transportation systems, including the commuter rail that makes it possible—but not always easy—for many people to travel between jobs in the high-cost-of-living Boston area and more affordable places to live. That commuter rail system is also currently diesel, and should be electrified.

Massachusetts should be doing better. This is the chance. Start talking to your friends and family who can vote in Massachusetts right now. An extra 4% on income over $1 million a year, affecting less than 1% of taxpayers, could change the state.

Democrat gubernatorial candidate Stacey Abrams on Saturday night told Georgians that Georgia is the “worst state” to live in.

Abrams, who is now worth more than $3 million after being in massive debt just a few years ago, owns at least two houses in Georgia, according to Fox News.

“I’m running for governor because I know that we have to have a conversation about who we are in this state and what we want for each other and from each other,” Stacey Abrams said on Sunday during a speech at the Gwinnett Democrats’ Bluetopia Gala, according to the Gwinnett Daily Post.

“Let me contextualize. When you’re number 48 for mental health, when we’re number 1 for maternal mortality, when you have an incarceration rate that’s on the rise and wages that are on the decline, then you are not the number 1 place to live,” she sadi. “Georgia is capable of greatness, but we need greatness to be in our governor’s office. We need someone who actually believes in bringing all of us in there together,” she added.

GA may be #1 place for biz, but we’re #48 in mental health, #2 in uninsured. #1 in maternal mortality & new HIV cases, #9 in gun violence. For too many, Kemp’s Georgia doesn’t include them. Why? Because #KempDoesntCare

As Governor, I’ll lead #OneGeorgia that’s #1 for all of us.

Stacey Abrams may think differently, but I believe Georgia is the best state to live, work, and raise a family.

And Marty, the girls, and I will work hard every day from now until November to keep it that way for four more years!

“Early redistricting wins for Democrats are collapsing across the map, deepening the party’s fears of a rout in November’s midterm elections,” Axios reports.

‘American Idol’ Finale Live Blog: Who Will Be The Season 20 Champion?

More than 100 million people forcibly displaced in the world – U.N. By Reuters