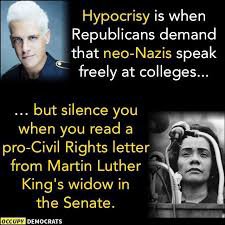 “It’s okay to pray as long as you pray.” This opinion piece appeared in the HuffPost in 2016 and exposed the hypocrisy inherent in this group of Americans. The evangelicals and other segments of Christian Americans contradict the basic teachings of Jesus. The words they use in the name of Jesus don’t match their actions. The article pointed out contradictions such as:

It may take a total Republican takeover of our government for Christian extremists to realize their values, lifestyle, and freedoms meant nothing to Trump. The MAGA movement used them to gain power, not promote a Jesus- based America. Being an extremist believer of any ideology results in the dumbing down of society. If Christians read the Constitution, they would know America is not a Christian country, the separation of church and state is built into our government, and ” all people are created equal.” If you love Trump’s “America First” slogan so much, follow the Constitution. Hypocrisy is demeaning the Church and will eventually lessen its value and influence. The excellent religion could have offered society is dying in the age of Trump. Cult leaders don’t end well, and neither do their teachings and followers. ‘We intend on going after everybody who was an accomplice to this young monster killing innocent people,’ Crump said. Did you ever in your wildest dream think you’d see the day when mothers were hoarding baby formula to feed their infants in America!

A woman filmed a mother hoarding all of the baby formulae off of the shelves at a local store.

The mother confronted the woman after she took every last can of baby formula for herself.